The media visibility of COVID-19 mortality

The current pandemic, like other disasters, reveals much about the workings of different societies. Mortality – the most significant (and easily quantifiable) measure of the effects of COVID-19 – is perceived in diverse ways around the world. As Infectious Historians focuses (for now) on a comparison between the United States and Israel, let’s take a look at how prominent media websites in both those countries treat mortality, and contextualize that with actual numbers. 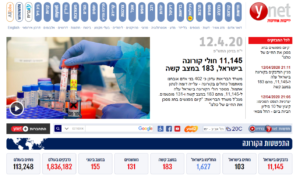 In Israel, mortality clearly receives a prominent position. Despite the ultimately low mortality (108 COVID-19 deaths out of a population of 9,136,000 when publishing this post), charts and figures in prominent places on Israeli media websites record and display several numbers related to mortality. that are thought to be relevant for their readers. In ynet, a prominent popular Israeli news website, the leading item’s title counted the number of people with coronavirus in Israel (11,145), those in serious condition (183). A permanent bar just below it listed other numbers – including mortality so far (103) as well as worldwide infections and deaths and other numbers.

The website of Haaretz, the country’s most prestigious newspaper (with considerably fewer readers), included a permanent feature focusing on mortality as its second item as well. This version provides on the left side a snapshot of worldwide COVID-19 mortality and infections, alongside a list of five countries (the US, Spain, Italy, Germany and France) together with their numbers of infections, deaths, and changes since yesterday. The right side of the figure focuses on the coronavirus pandemic in Israel. The numbers – like those on the left side – include total infections, infections since yesterday, and total deaths. The graph shows the number of new infections/day, suggesting that Israel appears to have stopped the spread of the virus.

The United States is already the country with the highest COVID-19 mortality worldwide (22,109 deaths). It also has the most infections by far (557,590). Both numbers increase (respectively by thousands and tens of thousands) daily. Yesterday, for example, the US has had over 2,000 deaths, the most in any country so far in this pandemic. Yet this mortality, or the comparative aspect, is absent from prominent US media outlets. 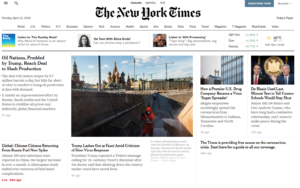 Here is the landing page of the New York Times as of writing. Neither here, nor anywhere below on the landing page, is there any graphic or way in which readers can get an overview of the current state of the pandemic. The leading story focuses on oil; two of the other studies focus on domestic political conflicts (President Donald Trump and Dr. Anthony Fauci; NYC Mayor Bill De Blasio and NY Governor Andrew Cuomo). The only COVID related number that appears is a reference to “almost 100 new infections” reported in China, “the largest increase in over a month”. For some context, on April 12, the number of new infections discovered in the US was about 28,900.

The Washington Post had more details, with numbers and mortality receiving a more central place. The leading stories here (this screenshot was taken at the same time as the NYT one) were more focused on the coronavirus, yet here as well there were few numbers. An item discussing the feasibility of reopening the economy by May 1 included in its one-line summary a count of deaths (“passed 21,000”) and infections (“more than 550,000”) in the US. Another item discussed the grocery workers that “are afraid to show up at work” after “at least 41” of them died so far. Yet here as well there was no acknowledgment that over 2,000 people in the US with COVID-19 died yesterday. Although unlike the Times, the Post did include a graph detailing the number of deaths in the US per day (and in total), this graph was low on their landing page.